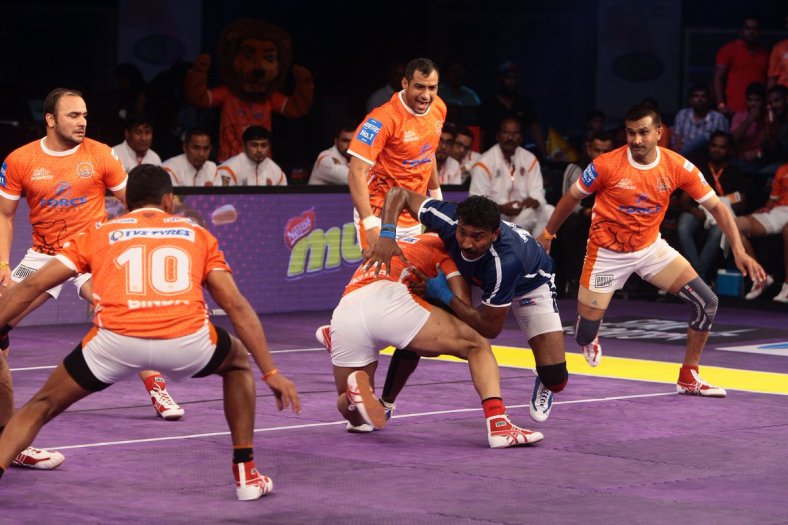 Puneri Paltan began their campaign of Star Sports Pro Kabaddi Season 4 with a loss against the Telugu Titans. Coming on to this game, the expectations were riding high. Dabang Delhi too on the other hand, failed to win their opening game of the new season. With both sides dying to register their first win, this had to be a special Tuesday evening for the game of kabaddi.

And the teams didn’t disappoint. In a nail-biter of a game, the captain Manjit Chillar stole a last minute point for the Paltans tying the score at 27-27.

Paltans started the game poorly though, going down 5-0 in no time. Then Sonu Narhwal started rallying the team with his raid point that opened the books for the Paltans. Thereafter the game was a roller coaster ride which saw both teams exchanging leads on multiple occasions.

The first lead for the Paltans came in the 12th minute and by half time rolled around, Dabang Delhi was trailing 10-14 despite having a strong start.

Comeback of the opponent

It was now time for the Dabangs to mount a comeback as the second half kicked off. They successfully tied it up at 18 each soon enough. As the game moved on, it became impossible to pick a winner – it was that close an encounter. At the very last minute, ManjitChillar who had a very quiet game so far scored a crucial raid and a tackle point that ended up tying the score at 27 points all.

The concerns remain for both teams, though regarding the number of errors committed during the course of the match. Either side would be disappointed not to have secured a victory at the Dome @NCSI. However, the fans went home contented after such a cliffhanger of a match.

PuneriPaltans remain seated at the top of the table with 14 points after this tie while Dabang Delhi struggled down at the sixth spot with three.

The more relevant question should be why wouldn’t you want to watch your beloved Puneri Paltan taking their opponents apart? Granted, they moved on from their regular home turf at SSCSC in Belawadi to the Dome @NSCI in Mumbai. But that shouldn’t come in the way of a true blue Paltan fan.Still, if you are caught in two minds about going to the matches, here are five major reasons why you should go and cheer for the home team.

He was adjudged the Most Valuable Player (MVP) the season before the last one. Good news is, he was retained by the Paltans for the upcoming season. He is undoubtedly one of the most skillful all-rounders in the entire league. You wouldn’t want to disappoint the captain now, would you?

They finished third, last time out. Some of the matches were etched in memory, the lads performed so well. This time can only be better. With the core of the team retained, Paltans are being touted to go all the way in the upcoming season starting on 25th June. Who are they kicking off against, you ask? Telugu Titans. Remember last time they met?

New Kids on the Block

The new guys bought in the auction are already being hyped a lot. Why not, if the biggest of them are RavinderPahal, the ex Dabang Delhi defender and SonuNarwal, previously the raider of Jaipur Pink Panthers!

You cannot be seriously using these trends on Twitter with passion and not thinking about going to the stadium to cheer your hearts out clad in that saffron jersey.

For the Love of the Game

If you really love kabaddi and happen to be a Paltan fan living in the vicinity of Mumbai, there is absolutely no reason why you shouldn’t be at the Dome@NSCI.